The Road to Paris website ran from July 2014 to April 2016. During the run-up to the Paris climate talks in December 2015, it provided integrated coverage of the science, politics and economics of climate change and sustainable development. If you would like to stay in touch with the latest projects from the Road to Paris team and the International Council for Science, follow @icsunews and @femedialab. To get the best stories from Road to Paris in one PDF, download a copy of our magazine.

The polar bear has become a cliche of environmental storytelling – in art, protest and advertising
Polar bears for a sustainable future! Seven moments in polar bear propaganda

The charismatic “polar bear” arrested at the Flood Wall Street protest in September was one of the icons of 2014’s climate debate. As the Guardian reported, the bear danced with the crowds as they descended into the city’s financial district, sat down with two Captains Planet and even gave comment to the assembled world press. But, as the day drew to a close, and protesters refused to move from an intersection, the polar bear ended up in handcuffs (to cries of “he’s an endangered species!” and chats of “don’t arrest the polar bear” from the crowd). 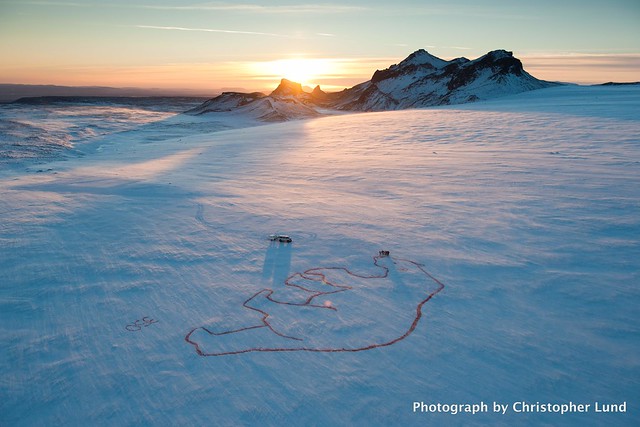 A collaboration of the World Wildlife Fund, scientists and artists, the Ice Bear Project took sculptures of polar bears made from ice and placed them in cities as pieces of public art, letting them slowly melt in front of passers by. The most famous of these is probably the one that sat in Copenhagen during the 2009 UN Climate Change Summit.

The Wall Street bear wasn’t the first to be arrested. In July 2012 a series of protests against Shell in the UK including polar bear arrests. One even ended up on the roof of a petrol station. Later that year, polar bears were also arrested in Moscow, this time targeting Gazprom.

Clary Salandy — who makes many of Greenpeace’s costumes, chickens, tigers, orangutans too — offered us some explanation for this international crime wave of polar bear activists. When we interviewed her earlier this year about her climate change themed Carnival designs, she told us:

“Carnival has to tell a story, but it also has to uplift the spirits. Even if you are telling a terrible story, everyone dances. It doesn’t matter how dark the story is, somehow you have to remember how beautiful it is. That’s what the polar bears do, they are so lovely… Our chickens, they are just hilarious! The police were killing themselves laughing! We have these pictures of the police pleading with this chicken, saying please don’t make me arrest you, and this truck full of arrested chickens… And that means you don’t get the aggression, because it’s not about aggression, it’s peaceful.”

Greenpeace UK are particularly committed to the cause of polar bears iconography in climate activism. Perhaps the most impressive of all was the giant puppet — the size of a double-decker bus, animated by 15 puppeteers — which marched through London in September 2013 as part of the Save the Arctic campaign.

It wasn’t just Wall Street that polar bears were getting up to mischief around the UN summit. On the other side of the pond, one was part of a team of activists stopping a 400-metre freight train carrying 1500 tonnes of coal to a Nottingham power station.

A recent ad campaign from Shell UK shows a girl reading a book in bed by lamplight, accompanied by a toy polar bear on her bedside table, with the caption “let’s keep the lights on when she’s your age.”

It didn’t take long before there was a counter-ad, with a pastiche declaring “let’s keep the drills on, so the Arctic’s gone when she’s your age” hung opposite Shell’s London HQ.

The same series of energy-policy themed adverts from Shell have also angered environmentalists due to the visualisation of a sort of carbon bubble. But that’s another story.

We welcome feedback. Be the first to share your voice.